skip to main | skip to sidebar

Saying you have no regrets is popular in our culture. Most of us want to feel we're in control of our lives, that we make good decisions, and those decisions don't have a negative impact on others. Feeling sorrow and remorse for something we've done that results in harm to others is also painful. This often motivates people to take corrective action, whether it's offering a heartfelt apology or taking a course of restorative justice. Only when you take these steps with humility and sincerity can you say you have no regrets.

The first weekend in May, Pamela Geller of the American Freedom Defense Initiative hosted an event in Texas she called the Muhammed Art Exhibit and Cartoon Contest, with a $10,000 prize for the winning cartoon. She knows full well that Muslims consider blasphemous any depiction of their prophet, so the very premise of the event was regrettable. What could go wrong? The event attracted the attention of two unbalanced individuals identifying themselves as Islamic freedom fighters. They arrived armed, wounding a security guard before police shot and killed them.

In an Associated Press interview after the shootings, Ms. Geller said she has no regrets about holding the event, predictably citing her right to freedom of speech. (Many eloquent and learned people contributed to a terrific survey on the rights and responsibilities of free speech.) She says she's already planning similar events in the future. Holding the first events was borderline sociopathic, but insisting she'll organize more of them leaves no doubt that she has psychiatric issues.

To say she has no regrets is also an incredibly entitled statement, as if her lack of regret is of first and foremost importance. People were shot at, one was wounded, and police killed the gunmen. There was a lot of avoidable trauma that occurred because she set up the conditions for people to take offense, and two fools took the bait. How can the person who hosted the event not have regrets about what happened? Does she think that not having regrets makes things right for the wounded security guard? After what happened, having no regrets is a luxury she can no longer afford.

Ms. Geller has a history of sticking her finger in the eye of those she considers enemies of freedom, namely all of Islam. Her organization Stop Islamization of America did its best to stop the development of a Muslim community center near the World Trade Center site, calling it the "Ground Zero Mosque," though it was neither. Here are some of the posters her organization sponsored on subways across the country: 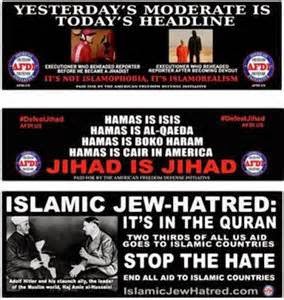 No one with a conscience could post such things.

Ms. Geller says she will wear a bulletproof vest at the future events. Will she offer them to security and attendees, too? Actually, anyone who would attend one of her contests is either terminally naive or looking for a fight. As a practical matter, no insurance company would ever underwrite another conference of this kind. She's clearly blowing smoke.

There are citizens of our country who equate this drivel about having no regrets with leadership. They say they want a leader who makes a decision and sticks to the letter of that decision, no matter the consequences. They want a leader who, in the words a Daily Kos' editorial used to describe the presidential candidacy of Ben Carson, says the Affordable Care Act "is the worst thing to happen to America since institutional slavery." This is not considered a gaffe by the same groups egging on Ms. Geller. "It's considered speaking truth to power," the DK editorial continues. "These are things that a vast swath of the conservative base believes in their bones, and they're damn happy to have someone finally willing to say it out loud." Ms. Geller certainly falls into this category.

OK, so this happened. I actually agree with something Donald Trump said about the debacle in Texas.

"What are they doing drawing Muhammed? Isn't there something else they can draw? I'm one who believes in free speech, probably more than she [Geller] does. What's the purpose of this? She's taunting them."

If Ms. Geller was so inclined, now would be the perfect time to change course. An organization that is for something rather than against Islam and Muslims is likely to be more durable. She could accomplish this by creating and encouraging dialogue between those who are concerned about security and moderate Muslim leaders who share similar concerns. There are plenty of organizations already doing this work, including Free Muslims.  Ms. Geller could rehabilitate her reputation and do good work by teaming up with them.

It's entirely possible that she and those who follow her lead may be unrepentant haters. But I can't and I won't stop dreaming of days when the voices of harmony drown out the voices of dischord.